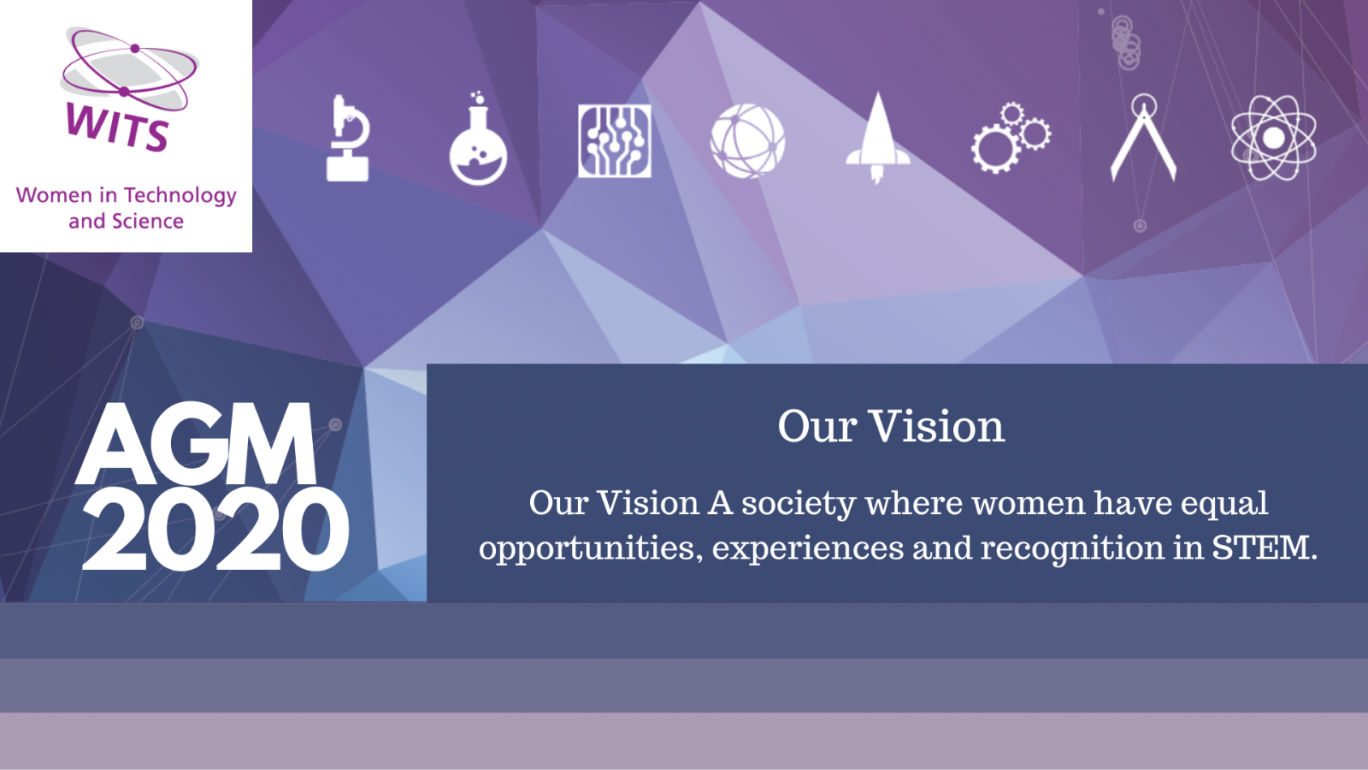 Women in Technology and Science 2020 AGM

The 30th WITS Annual General Meeting (AGM) 2020 took place on Saturday 5 December 2020 via Zoom. Over 45 WITS members from around the country gathered to review 2020 and elect a new Executive, agree a WITS Strategy for 2021-2025 and plan for 2021. The Secretary’s report and the report of the Event sub-committee were circulated to members before the meeting.

The meeting began with the 30-year anniversary video. It’s hard to believe that WITS is thirty years old. Julie Hogan, WITS Chair 2020, outlined some of the changes for women in STEM since 1990. The chair outlined the key features of WITS - that it is a voluntary, national membership association that advocates, acts and connects women in STEM. It has members of all ages from third level students to retires, across all areas of STEM and across sectors both public and private and across industry and academia.

Julie then outlined another busy year for WITS. The focus of the year was celebrating and learning from 30 years of WITS. Day-to-day operations are running more efficiently to cope with increasing growth. The social media team is working well and the events sub-committee is up and running. Structures for support of members and student societies were defined and there was a role models' campaign team.

It was Julie’s last address as chair and she thanked all the 2018, 2019 and 2020 executive committee members for their work. She acknowledged the work of active members, those who do admin, take part in sub-committees, book groups, panels, act as representatives, help strategy and maintain the website. She thanked all members and noted how our members give weight to what WITS does. Finally Julie thanked supporters who give their time and expertise so generously.

The Chair's address informed the meeting which then read and adopted the Secretary's and Treasurer's report.

Andrea Johnson presented the report of the Policy Sub-committee. It has worked well this year with five members, three policy submissions – on flexible working, the NWCI budget plan and to the Citizen’s Assembly on Gender Equality – and a range of activities. There are three recommendations to the AGM, that of positioning WITS as “Expert” for national consultation, developing a symposium to position and document WITS expertise & policy focus and to build relationships with government departments. The recommendations were agreed by the meeting.

The report of the Events Sub-committee was presented by Magaly Mora. This year there were 18 events (mainly online) with > 346 attendees and viewers, Lab Coats and Lace was launched as an e-book in Kindle version. There were two webinars; one in collaboration with EI, and the second in collaboration with Women in Research Ireland, Lean in Ireland, the UCD Surgical Society, and Trinity Women's Graduates. There were supportive events such as chair yoga, coffee break and mindfulness during initial COVID-19 months with lockdowns and pandemic restrictions. There was one workshop about salary negotiation with Gendelity and the online book club WITS Reads.

One amendment to the rules was approved by the meeting.

Auditors and Trustees were elected for 2021. President Michael D Higgins was nominated as patron and is to be updated on WITS work.

The outgoing officers and Executive were thanked for their work in 2020. WITS supporters in 2020 were also thanked.

There was a review of the WITS Strategic Plan 2018-2020. This has now been completed.

To advance the retention of women throughout their STEM careers by researching, developing and sharing insights & best practice.

The strategic objectives are research, advocating, informing and resourcing. The strategy will be reviewed by the Executive every six months. Metrics and indicators will be reviewed and developed as the plan progresses and there will be a report to members each year at AGM as to progress of 5-year strategic goal. The WITS Strategy 2021-2025 was approved by the meeting.

Plans for 2021 were outlined. The aim will be to further WITS Vision. There will be a focus on events, increasing individual and corporate membership as well as reviewing and updating WITS profile and communications. This will be supported by a new sub-committee structure. There will be:

The meeting concluded with best wishes to all for 2021.